Has this scope been bubba'ed?

So, I have a habit of buying vintage scopes for vintage rifles. The new stuff is usually some form of matte black, and just doesn't look quite right on many older guns, at least to me. My go to is the Weaver K4 as they are usually decently nice, simple scopes that can be had cheaply. So, I bought one and it showed up today. There's something not quite right with it.

So, the ebay seller described the glass as being clear and scratch free. When I first looked through the scope, that was far from the case. There were numerous brown/dark colored things on the lens that looked like scratches. 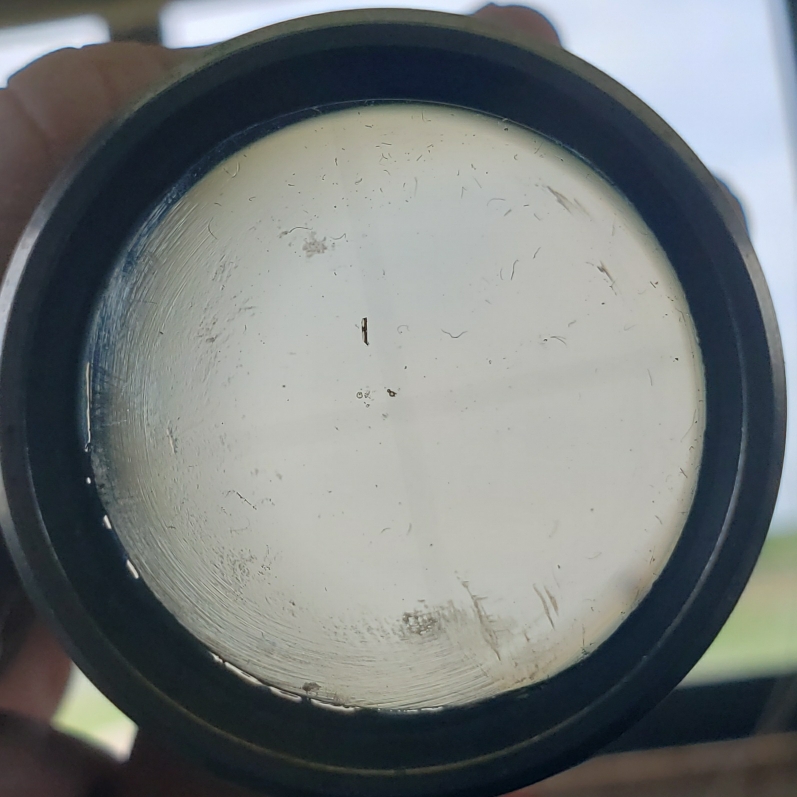 After a lot of looking, I realized they were not on the outside of the lens. In fact, most of it wasn't even on the first lens. It was some kind of sticky stuff stuck to the inner lens, and it cleaned up. What didn't clean up is the stuff around the outer edge of the outer lens. 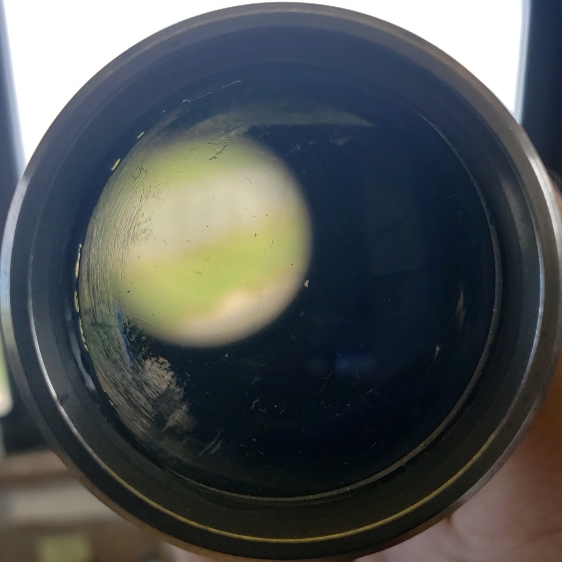 Now this stuff is definitely on the outside of the lens. You can actually feel it with a finger nail. It's very faint, but it's there. 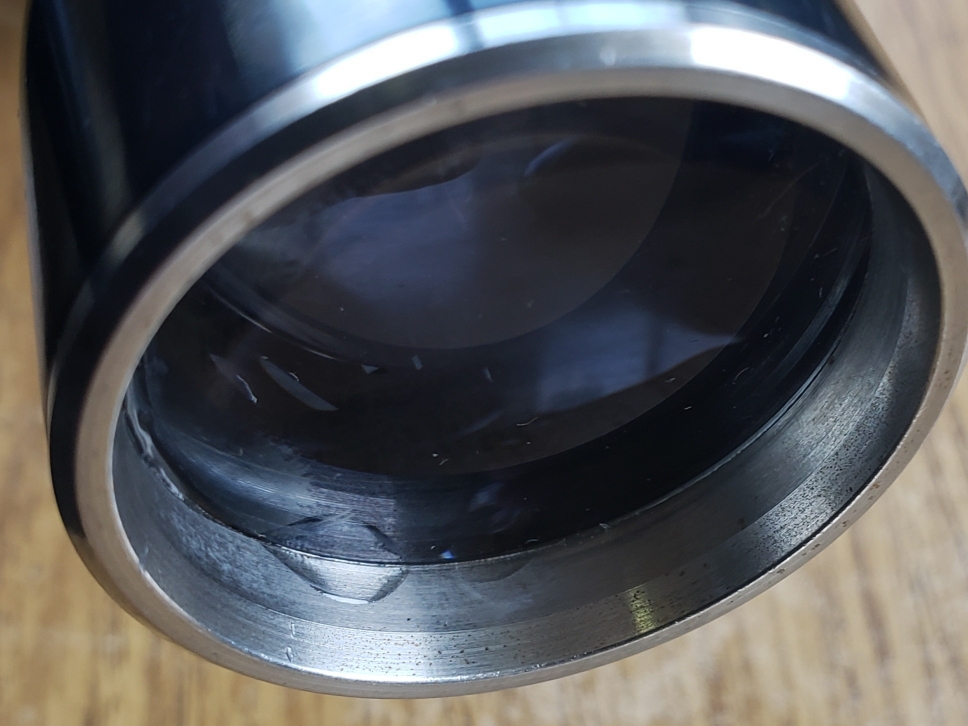 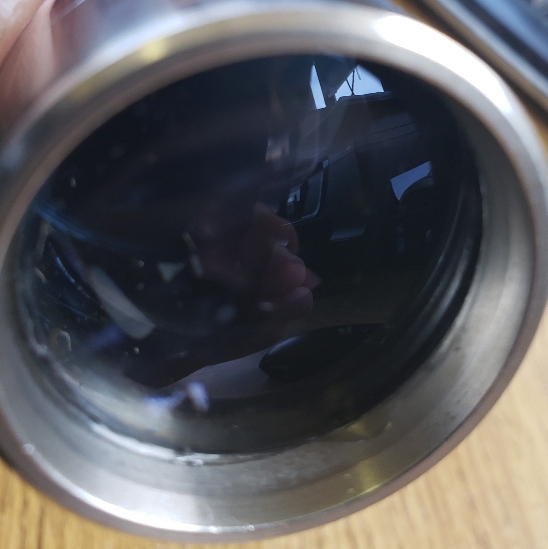 My question is, is this a screw up by Weaver back in the day, or did Bubba try to fix the lens after it popped out at some point?

I'm trying to decide whether I want to send it back or try to fix it with some glue remover. The scope was cheapish ($100), but not enough that I would accept it as it is now. The rest of the scope is honestly really nice. It looks almost brand new. It's just that one lens that's buggered up. It just unscrews from the body so it could be replaced, but good luck finding one.

I'd call this guy: https://www.vintagegunscopes.com/
He's always willing to help.

Maybe someone told them to use ammonia and newspaper to clean it...
T

Yep,Some dumbazz probably tried to "Seal" the scope after it started fogging up after the factory inert gas leaked out over the years.
Some people are just too stupid for their own good!

I'm not really interested in having it professionally restored. I paid pretty close to the top end of what these are worth due to the condition it was supposed to be in, but I did look to see if they sold the part I would need. It looks like they sell the retainer piece, but not the lens.

Yeah, the more I look at it, the more I think someone tried to fix something they had no business messing with.

I sent the seller a message with the pictures. It says on the item that he doesn't accept returns, but I have him dead to rights on the inaccurate description, which eBay says they specifically protect buyers against. I'm going to give him the chance to do what's right before I go to eBay and file a dispute.

It's sad. It was a nice scope other that that bad repair attempt.

EDIT: I'm going to send it back and he's going to refund me with no argument. I don't think this was his personal scope, it appears that he just sells a lot of sporting goods, so this might be one that had issues he just missed. It's great to see that there are still folks out there that will still do what's right.
Last edited: Sep 4, 2020

Txhillbilly said:
Yep,Some dumbazz probably tried to "Seal" the scope after it started fogging up after the factory inert gas leaked out over the years.
Some people are just too stupid for their own good!
Click to expand...

And they drive and vote. There seems to be an over abundance of stupid drivers in Lubbock.

Looks like someone used the lens to hammer in a couple nails or tent stakes.

I got my money back pretty much as soon as that scope hit the seller's doormat, so at the very least, he made things right. I guess I'll just keep my eyes open for another one.
J

Jeez, what a let down.

My rant about eBay:

eBay used to be great, but ever since about 2015; everytime I buy anything from there, it turns out to be broken, counterfeit, or not as described in the slightest. Knowing this, I ask specific questions BEFORE buying.

Recently I bought an OEM vehicle fuse and specifically asked before purchasing, “if it was corroded.” They said “it was in great condition, no corrosion.” Assured I could buy with confidence, I made the purchase.

When it finally arrived, it was corroded. If anyone knows about electrical, that’s unusable garbage. The guy knew he was selling junk. When confronted with pictures he said I could send it back for a refund. Why? So you can rip someone else off? Waste more money out my pocket? I Charged back my credit card and tossed it in the trash.

I will never again buy from eBay. Apparently, eBay is a haven for junk peddlers that can’t hawk at the swap meets, Craigslist, or the pawn shop. People are so dishonest these days, sight unseen is just another tool in the box of a con artist.