Call me suspicious, but I strongly believe that the Chinese and the World Health Organization have been hiding the real truth behind the numbers of cases and deaths in China along with the current spread of the disease worldwide. Even with that, the following chart shows a linear progression that illustrates what can happen if the epidemic continues unabated and turns into a full scale pandemic. Just look at the growth of numbers in the first 7 days and consider that these numbers are probably doctored at best and grossly understated at worse.

I have a trip booked to Los Angeles the third week of February but I have already told the wife that I will be watching to see what happens over the next two weeks to determine if I will cancel or not. There have already been cases in Orange County and the entire LA basin is full of hundreds of thousands of Chinese who go back and forth on a regular basis.

So far, East Texas looks pretty safe but I have my tin foil hat ready 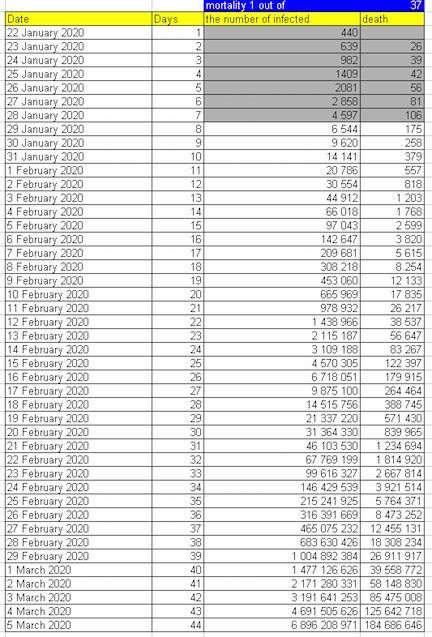 Stolen from other thread....

Kid at Baylor U in Waco has a confirmed case.

You mean the China that said there was no one killed at Tiananmen Square? That China? Have no idea why you are suspicious

Those numbers are overly aggressive and make assumptions that no efforts would be made to halt the advance, but nevertheless the point is well stated - this could get ugly. Glad the kid in Waco proactively got checked out, he likely saved many from getting sick.

dsgrey said:
Wasn't the bird flu suppose to kill us all back in 2013?
Click to expand...

deemus said:
Kid at Baylor U in Waco has a confirmed case.
Click to expand...

Are you sure that this is the latest? I thought I heard that the students at A&M and Baylor were found to NOT have coronavirus? Suspected, but then tested negative.