Unexplained incident thread. Ghosts? Bigfoot? Midget Clowns in the woods while hunting? In honor of Ghostober.

Since it's almost October I figured we could have a fun thread to relay unexplained events you have experienced.

Ghosts, Bigfoot, UFOs or anything Wierd or unexplained. With the ammount of beer vodak and whiskey consumed around here we outta have some good stuff reported.

When I was 12, my dad and I were fishing in a remote area of Lake Sam Rayburn known as the oxbow. He caught a huge bass. 5 lbs plus and it broke his line as he was trying to net it.

We went back to fishing furiously. I felt a tug and started pulling. Dad wanted me to go slow and fight it and wear it out.
But, there wasn't much action. Whatever it was started to slowly rise from The bottom of old Sam Rayburn Lake.

Lo and behold,. I pulled up an old Coleman lantern. And you want to know the best part about it? That son of a gun was still burning.

I'm pretty sure I saw a Chupacabra earlier this week

I thought it was a coyote, but noticed it had no hair or visible tail.
My brain couldn't associate it with anything I've seen before..it was a weird experience for sure

Had a poorboy deer lease in some swampy ground near Dayton TX. (Back before the town upgraded by adding a prison.) There was a buck that I think every one of us shot at and could never hit. I shot at maybe 75 yards and didn't hit him. A friend shot at him at 50 yards the week before that. The guys on the neighboring lease told us they had seen him for years and had all shot at him. They considered him to be a ghost. He had a very unique rack that was very narrow, but very tall, and he had a definite limp from some old injury to a hind foot. He'd appear trailing a doe, and disappear the instant you shot. We spent hours looking for blood, and we all rechecked our scopes only to find that they were perfectly sighted in. Then we'd hear about him showing up again somewhere. As far as I know, he may be a ghost and may still be deviling hunters in those woods.

my sister is a real estate agent in California.


several years ago she had a home listed that the owners swore was haunted.

She got a call from another agent showing the home that the lock box for the house key would not lock when they were leaving.

She was close and swung by to resolve the issue. The other agent had left locked the door and left the key outside.

Needless to say she made haste to the front door locked it and got the hell out of there.

This guy keeps showing up on my game camera. I think it might be Bigfoot! 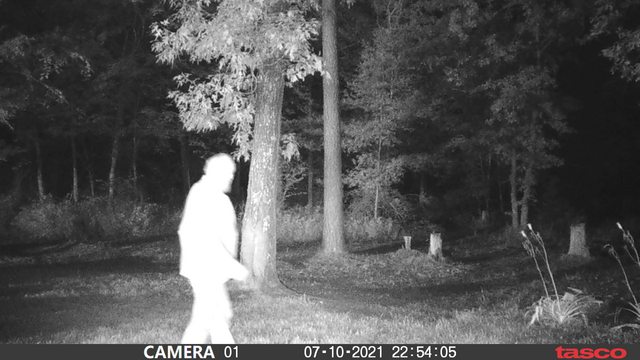 I believe in ghost and have had some experiences. Caught a pic of the face on the UT medical center in Galveston a couple of months ago.

The story is the old man owned the land and hated hospitals, so he wouldn't sell. When he died, the family sold anyway. His face was on the top tile. They pressure washed his face off and it showed up on the tile below. They did it again and it moved again to the 3rd tile. They leave it there because they fear the next time he will enter the building through that door.

One day, Back when by youngest 2 girls were still kindergarten age, I put the girls down for a nap and started to do some housework. I locked the doors with a child proof lock we put at the top of the door so they couldnt get out while I was off doing chores.

I goto do dishes and catch movement out side and look to see my youngest outside on the swing set just swinging away. I'm both pissed and perplexed, first that she snuck outside without permission and contrary to her direction to take a nap all while wondering how the hell she got out there.

I go stomping to put an end to this and find all the doors still locked. I goto her room and she's sound asleep in bed. I then open the door to see the swing swinging with no one in it. No way another kid could climb a 6 foot locked fence.

We have seen that little girl often still to this day almost 20 years later.


Just a couple years back I'm sitting in the bathroom at about 330 am, cause I never sleep, and all of the sudden hear a small child loudly laugh in the kitchen right on the other side of the wall. As soon as I hear it all 3 dogs jump to their feet in their crates and start barking like a stranger was in the house hitting the doors of their crates. They heard it too.

I was pulling my pants up running down the hall within a couple seconds. Everyone was in bed sound asleep, no tv or other sound emitting devices were on, no toys in the house that make noise anymore cause the kids were late teens, the doors were locked and no one was there.

My wife thinks ou ts her sister who died young and showed up when she had kids of her own or one of the miscarriages she had.

vmax said:
I'm pretty sure I saw a Chupacabra earlier this week

I thought it was a coyote, but noticed it had no hair or visible tail.
My brain couldn't associate it with anything I've seen before..it was a weird experience for sure
Click to expand...