Ruger American .22 that comes with three different length adapters for the stock. All four of us grew up shooting my dad's remington .22 from the 1940s. Despite it being full size it worked even at age 5-6 but the Ruger has been nice for teaching kids.
E

Completely agree with the 15-22 recommendations. Very light, the stock adapts to the size of the child, triggers can be installed and tuned to an appropriate weight, grips can be modified for finger length, the upper can easily be configured for different sighting systems to teach marksmanship. Manipulating magazines and a safety is no issue, kids learn fast and they don’t have to load to full capacity.

I mounted my 15-22 onto a tripod to start my son shooting when he was 4. This enabled him to focus on properly using the magazine, safety, sights, and trigger, without holding the rifle. As he became more able to operate the rifle safely I could slowly and deliberately introduce new maneuver limits.

andre3k said:
My kids are starting to ask me to take them shooting. Daughter is 6, son is 5. I wanted to start them out with airguns, but figured I might as well go the 22 route. What options are out there for youth size rifles? Currently looking at the Savage Rascal and CZ 457 scout. Huge difference in price between the two.
Click to expand...

I always recommend starting children off with a bolt action rifle (not a bad idea for adults too). A bolt action is inherently as easy or easier to shoot with discipline than a semi-auto and is inherently safer than a semi-auto. While I recommend a bolt action, I do not recommend something like the Savage Rascal which as I understand is a single shot rifle nor do I recommend a bot action fed from a tubular magazine. Instead I suggest a 22 bolt action repeating rifle fed from a box magazine. That way you can teach your kids to shoot it first as a single shot by loading one directly into the chamber or by loading one round in the magazine. When they are ready to move on to firing several shots in a row - then load the mag with as many as you want up to full capacity.

They are more likely to concentrate on each individual shot when they have to operate the action themselves to load each individual round instead of the gun loading each round for them. Thus they learn more self control when shooting and are less likely to just pop em off one after another as is the temptation with a semi-auto; they actually have to think of what they are doing to operate the action when using a bolt gun. It is also easier for the person training them to observe their shooting technique when they are shooting a bolt gun. On a side note, I find that bolt action guns work just the same with new shooter adults as they do with children. Discipline is more likely learned when you start slow and sure as opposed to giving them the opportunity to shoot rapid fire too soon. After shooting a bolt action repeater for 6 moths to a year or so, only then would I move them onto a semi-auto of the proper size for the children and that is with a 10 year old. I might make a younger child wait longer for that progression but that is up to the child's parent(s).

As far a choice of bolt action rifles go, I found that the Armscor 14Y was an excellent rifle for young children around the 8 to 10 year old range; it may also be good for younger children and was manufactured as a youth rifle, a newer very similar model has replaced it. I imagine there are several other brands that offer similar rifles but I have to say the Armscor 14Y that I bought my son (heck it was about 22 1/2 years ago) is one of the best made rifles I ever bought in 22 LR. It was an all steel and wood rifle with plastic butt plate. While I cannot speak as to the quality of the newer version, I would expect their new model to be made close to the same as was the 14Y decades ago.

Today, the model number is the M14Y and I believe the brand is Rock Island Armory (owned by Armscor). They still use a hardwood stock, the finish has changed from deep blue to Parkerized, still has a 10 round mag (15 also available) and now I believe it has a threaded muzzle. MSRP is around $150. More specs here: https://www.armscor.com/firearms-list/m14y-youth-rifle-22lr-10rd

Despite the fact my son is now a middle aged man - he has not sold his Armscor 14Y and I doubt he ever will sell it. My guess is he will pass it on to his own child should he ever be so blessed. It's that kind of a gun - one that makes memories from one generation to the next I think.

ETA: I was just checking the availability (did not find one but they may be available but I only checked a few sites). Anyway, when doing so, I saw that Buds Gun Shop has 26 reviews of this rifle. Every review was either a 5 out of 5 (81% of the reviews) or a 4 out of 5. It dos not get much better than that when looking over reviews of anything.
Last edited: Jun 12, 2022
O


Sent from my iPad using Tapatalk

obviously he had assistance but the first gun my son shot was a sten.

Out here by the lake!

Just buy an quality AR with a colapsable stock and add a dedicated upper. The shits only going to go up in price & become harder to get. Get a case of 5.56 & .22 while your at it.

Watching While the Sheep Graze

Bought the Granddaughter a Savage Rascal a few years ago......She hunts now with an AR, but we all still shoot her little Rascal.........

Bolt action first, then a repeater of your choosing.
Rascals are GREAT training guns. Pick the Rascal over the Cricket any day. I have said it many times on here, but I believe in it so much I think I have purchased 7 or 8 of them all together. One for each of my kids, and one for several of my nieces and nephews.
They may outgrow them in a few years, but at ~$150 it’s still a great investment. 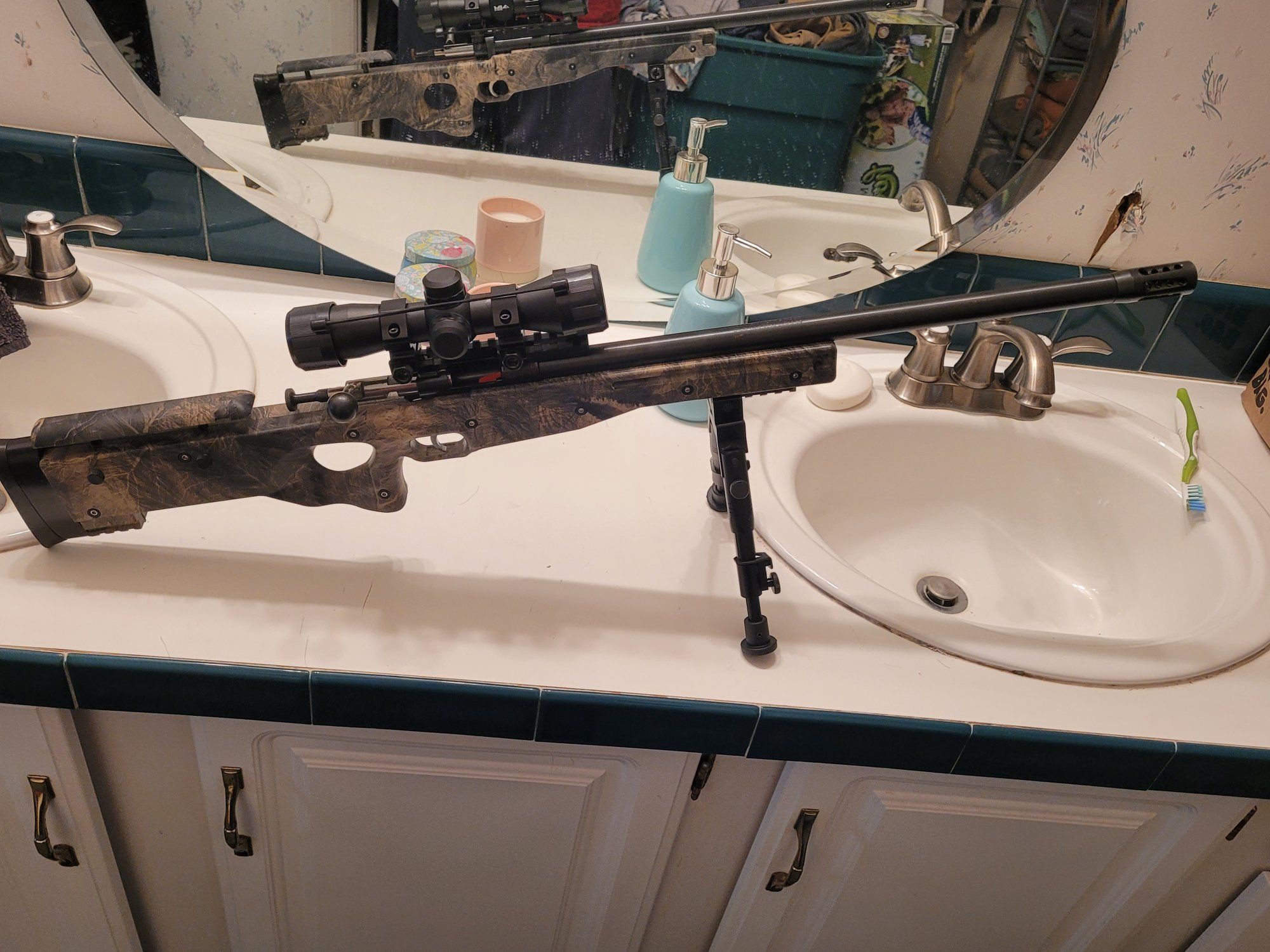 I got the cricket 22 for the wingman

I forgot to mention, a major added bonus with a blot action is running Aguila Super Colibri. They are so quiet you don’t need a suppressor to shoot in your own backyard. I’ve literally shot with kids on one side of the house, while people on the other side of the house never even knew.
You must log in or register to reply here.
Share:
Facebook Twitter Reddit Pinterest Tumblr WhatsApp Email Share Link