Just how little did you grew up?

Apparently you have no friends.

Polka Music?
Isn't that an oxymoron, like "jumbo-shrimp" and "deafening silence"? 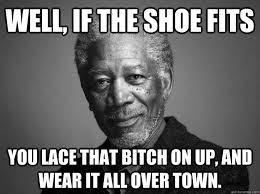 My parents were like most typical depression era kids. Tight as could be.

My dad had clothes so long they came back into style. I got a new pair of shoes when the old ones hurt my feet too bad to wear them. Though I did have dress shoes and tennis shoes. Might be why I have a lot of shoes.

We ate at home in the first house my parents owned. They had it built. It was a blue collar neighborhood. Got pretty rough before we moved to the farm.

Maybe once a month I got a burger or chili dog at A&W. My grandfather would take me to a local Mexican joint and he would order. The 59 cent kids tamale plate, which I would put ketchup on. First time I ate at McDs I was a teenager and bought it myself. Probably why I eat out a bunch.

The first new car we had was a GMC pickup truck my dad paid cash for, $2875. I got to drive it as a teen. Hauled a crap ton of hay using that truck.

In retrospect we had it pretty good. After we all left home my dad loosened up a bit. Him and my mom traveled (by car) often. They never flew in an airplane. They didn’t care.
Last edited: Jul 12, 2020

In a dumpy house on an expensive lot

Axxe55 said:
You could try some Polka music!
Click to expand...

Grewing up out side Chiraq I heard enough of it! Chimpcongo has a huge amount of Polish.

baboon said:
Look if I can't self medicate the pain away with booze what do y'all suggest?
Click to expand...

Try taking your fingers out of the wall outlet.

baboon said:
Look if I can't self medicate the pain away with booze what do y'all suggest?
Click to expand...

A weekend trip to Colorado?

Not being familiar with your particular conditions, can't suggest otherwise. If its mental anguish, talking to someone you can confide in and working out the kinks on your own otherwise is the only thing I ever found to help me. 18 years ago I ran over a lady while I was a school bus driver - she lived and was ultimately ok, but damned if I didn't have honest to god PTSD from that. I was driving a transit style (flat front) bus and she got smacked with the cross-view mirror and went under the driver side steer tire. I got the bus stopped 3 feet before the driver side duallies crushed her midsection. The impact knocked the curlers out of her hair - fuckin' curlers strewn all over the intersection. She was bleeding like a stuck pig from the impact of the mirror on her forehead, and she was fighting me when I tried administering first aid till the hose draggers arrived to take over. For a solid six months I couldn't sleep because every time I tried closing my eyes, I was back in that intersection, seeing her pop out of my blind spot and seeing the mirror hit her. In my nightmares sometimes she died and it made it worse. Bus company paid for a therapist, but he was zero help. I hated even getting behind the wheel of a passenger car for a while, had my wife do the driving.

I had a friend whom I could confide in, I'd talk to him a lot and he actually had things to say back, unlike the therapist who sat there asking stupid questions not relating to the problem at hand. Eventually I got to a point I could sleep thru the night. It took me a couple years before I could get back behind the wheel of anything but a car, and it took interviewing and road-testing for a job as an armored car driver, having to drive a big armored truck thru tight neighborhoods in Portland that let me realize I didn't have to be afraid. One positive after that incident - I was a FAR more cautious driver and lost all trust in pedestrians.

For physical pain - I'm typically a tylenol or ibuprofen + deal with the aches type, I don't like being under the influence of harsher pain killers. I suffer chronic back and hip pain from 20 years of driving for a living in one capacity or another and for a while I was seeing a massage therapist regularly and it helped immensely. Sadly my wife sucks at giving a massage compared to a trained MT.

For other pain, acupuncture / acupressure works.

As for the original topic...

I was raised by my maternal grandparents, unfortunately not by my parents. They were depression era kids - grand father was born April of 29, grandma was January of 33. We always had a BIG vegetable garden, grandma canned what we couldn't eat fresh. Made homemade Spaghetti sauce and canned it. Canned fruit in the fall and she made her own jellies and jams. When we went shopping, we went shopping. We had a big deep freeze that was full of meat and bread. Eventually we got a second, stand up freezer that became the bread freezer and she would put meat, frozen desserts, and frozen veggies in the big chest freezer.

We kept vehicles for at least ten years. My grandma had a 1979 Toyota Corolla she kept until about 1988 / 89 when she got a Ford Taurus. We had a 1980 F-250 that was driven up till I managed to kill it for good - the third wreck that truck was in, and that was IIRC 2004. We only did family vacations about every 4 or 5 years, the old man would bank his PTO and take a month off (he worked for the state).

I also never did the "normal" shit kids did. We never went to Disneyland or theme parks - we went fishing a lot. I never went to summer camp. I didn't get into team sports, but at 10 I got into martial arts and that was my passion (still is one) all thru school, besides fishing that is.

I grew up learning how to build stuff out of wood - the old man had a hobby business building custom furniture. When I was 7 he built a 16 foot inverted V hull boat. So I learned a bit about wood working you could say.

My child hood wasn't "normal" by most kids of my era's standards, but I didn't turn out to be a drug addled turd, or a welfare queen, so I think I came out OK.

I started out growing up in Houston in the 1960's. Many of our summer vacations, my brother and I spent up here at our grandparents. Living the more rural life. To be honest, I enjoyed both. In 1972, things changed a lot when my grandfather got sick with colon cancer. We moved from Houston to be up here so we could help out our grandparents. Dad said we would move back to Houston or Conroe when my grandfather got better and got well. That didn't happen. He died in 1974, and Dad inherited the farm, so rural life became our new daily life and not just during the summer.

I have no regrets, other than losing my grandfather at the age of 11. I learned so much from that man. Growing up on the farm, taught me valuable lessons that I have used my entire life. It was sometimes a hard life, but I wouldn't trade the experience or knowledge I learned for anything. We did have some really great times too. Got to learn how to really go fishing and hunting. We did more camping. We just did it on the farm instead!