Dougw1515 said:
How does that work when purchasing a handgun in Texas? You can use your drivers license as proof of residence and then your AZ permit for the purchase?
Click to expand...

You cant use an out of state permit to bypass the instant check. Which is stupid but a minor inconvenience to me.

Yes you still need your DL or other acceptable documents for proof of residence.

AZ doesn't list an address or picture on the permit like Texas does anyways. My address connected to my AZ permit is my texas address. Every few years they send me the renewal forms, I send the cash and paperwork and they run the background. Takes about 2 weeks door to door with snail mail to AZ and back.

Oh and AZ DL are good till your 70. Another thing texas could do but I suspect it has more to do with fees than common sense. No state income tax really isnt a big deal after they rape you for everything else from tolls property taxes or the DMV waiting till near death tax.
Last edited: Sep 15, 2020

tonelar said:
Thought I read that Texas issues 'non resident LTC'. What am I missing?
Click to expand...

in my case I'm not actually an Oregon resident anymore, we've been here in Texas for a month and a half. Thanks to the COVID panic and everything operating at snails pace, I'm in a limbo state as far as certain things are concerned.

I do like candcallen's idea of the AZ permit - I've got to explore that notion more.

Sasquatch said:
in my case I'm not actually an Oregon resident anymore, we've been here in Texas for a month and a half. Thanks to the COVID panic and everything operating at snails pace, I'm in a limbo state as far as certain things are concerned.

I do like candcallen's idea of the AZ permit - I've got to explore that notion more.
Click to expand...

Residency will be an issue with any permit as it's part of the ID and background. You should be able to satisfy that though with documents depending on the state requirements.

There are a couple federal grey areas when carrying on an out of state permit relating to schools and distance.

irt out of state permits
be mindful of their fine print. one i remember will not give u a carry permit if your current state is “shall issue”


I thought this was going to be about carrying a potato gun.

Be careful when carrying in another state. Montana recognizes the Texas TC. However you cannot enter any establishment that serves alcohol while carrying. No exceptions except for Leo's. So a restaurant that serves is a no go, which is different that here is Texas.

I thought this was going to be about carrying a potato gun.
Click to expand...

Dougw1515 said:
Texas has reciprocal agreements with certain states. If you have a carry permit from one of the states Texas has repciprocity with you can legally carry in Texas.

This chart indicates which states Texas has a reciprocal agreement with. To my knowledge Texas, nor any other state, can/will issue non-resident permits. You must be thinkin' 'bout fishing/hunting licenses! 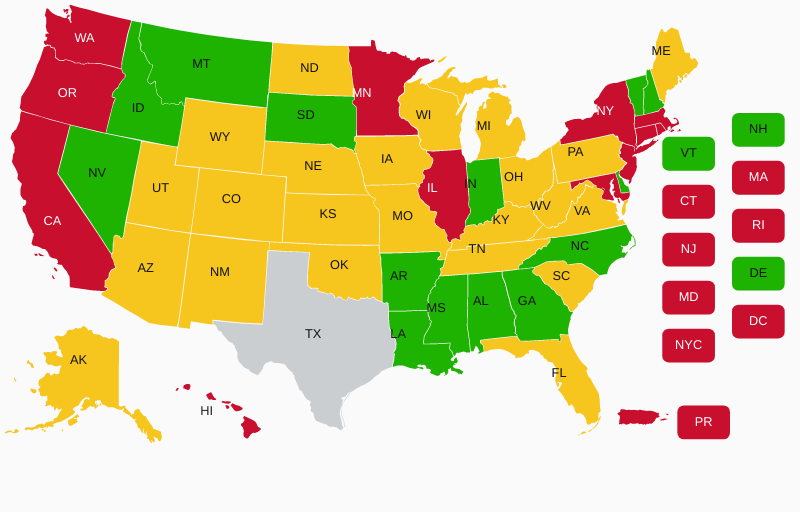 I now have a non-resident license for Utah, Maine, Illinois. New Hampshire, Connecticut.

Maine, even though it’s a constitutional carry state, it still requires a LTC for state and national parks. They will NOT recognize Texas for the parks.

Connecticut, does not recognize any states LTC either.

New Hampshire, is an easy one to get and it offers reciprocity for some states.

because of the political nature, we do not know when and if and how reciprocity between states will change in the future. So the more LTC’s you have the better odds you have of maintaining reciprocity with the greatest number of states.